You’re in a meeting.

You have a lot of items to cover.

You are in charge of the meeting.

You ask a lot of questions like: Do you all agree with this? Is this acceptable to you?  Do you like this idea?

You like to be in control of what happens.

People seem to be disengaged or passive.

Guess what?  You may be leading your meeting hierarchically.  You may want to consider a few tools and skills that will help you be more of a facilitative meeting leader.  Here is a way to make one or two small changes to move away from what most are likely calling the “boring” meetings they HAVE to attend.

In the ToP Facilitation Methods course we start off by showing the difference between a hierarchical leader and a facilitative leader.  We note the general trend in the last 10-20 years of moving away from an authoritative directive style to a more inclusive and empowering style.  The facilitative approach is always searching for ways to explore beyond the usual structures and boundaries.  The facilitative leader attempts to draw out the best in individuals and groups.

“It sounds great”, you say, “but how do I do that and still get through all the agenda items?.  And you say, “No one seems to want to talk much – it is “like pulling teeth””.  We agree with you!  Why? Because there  has been SO little modeling of a facilitative leadership style and SO much exposure to the hierarchical style, that it is difficult to remember and practice this new, empowering style in leading meetings. 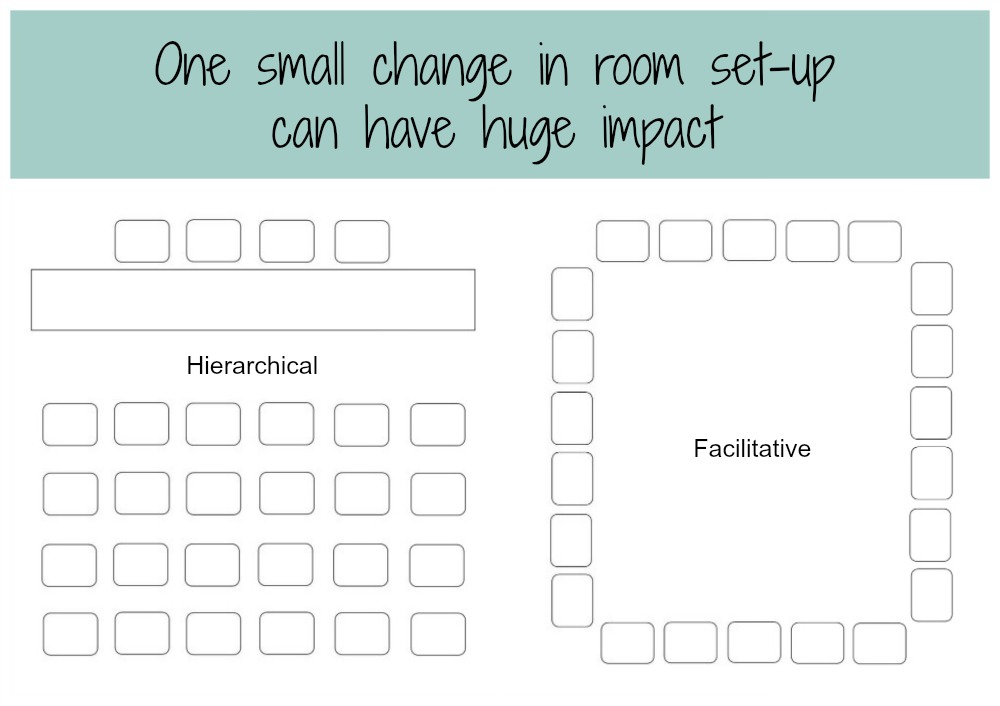 So the lesson for me is that you cannot jump too quickly from one leading style to another.  You can make small changes.  In this instance, we made one small room change.   The decision we agreed upon in this instance was that we would set the room up exactly as they had done so at the beginning except for one small change.  We put the leaders in front of the table rather than behind the table so there wasn’t a barrier between them and the community leaders.  And we agreed that it would be ok at some point in the meeting to encourage people to turn to one another in small groups of 3 or 4 and answer an open ended question such as, “What is the impact of this decision on you?” They even agreed that we could use paper and markers and get them to write some ideas in their own language and post them up on the wall during the meeting.  In fact, they had even become excited by these small changes.  1) Take the table away from the leaders, 2) get people talking in small groups using open ended questions, and 3) write their own ideas down in their own language to share with everyone.  So, that is three small changes that make a HUGE difference to getting them engaged and communicating more authentically with their leaders. The ONE change that was huge in impact but small in effort was removing the table between the leaders and their community members.  The table had been serving as a barrier that distanced the leaders from their community and made them seem less approachable.

We were invited into a large not-for-profit organization to observe a meeting and then train a subset of this group in meeting skills.  There were almost 40 people attending the 45 minute meeting.  At one point, the staff who had designed the meeting had shown a marketing video of about 7 minutes.  There was no discussion of the video.  It was a new video they had produced to promote a program.  Immediately after the video they moved onto the next agenda item.  It seems the intent of showing the video was to let people know it was available for use now.  Here’s what I would have changed:

That exercise would take 8 minutes instead of 7 minutes!  It would engage everyone, take them out of passive information receiving mode, and likely greatly increase future creative uses of the video. (BINGO! Big impact!)

So we invite you to take a chance.  Start small in changing your style from less hierarchical to more facilitative.  There are few circumstances these days where the group is well served if we allow one person to dominate or influence everyone else and force the rest of us into passive or bored mode.  Your job as a leader will be much easier and effective as you come to rely on and trust in the wisdom and ability of your group.