When Things Heat Up – What Expert Larry Dressler Does

Over the last year we have featured a number of facilitators asking them the same questions.  This month we have the wonderful treat from hearing from a well known facilitator and author, Larry Dressler.  Larry wrote “Standing In The Fire” and has just had his book translated into Japanese!  I met Larry for the first time at the IAF Asia conference in Tokyo 2013.  I was impressed with his authenticity and presence.  Read about Larry as interviewed by long-time colleague and friend, Marem Flores.

The longer you have been doing facilitation, the more techniques you should be applying, right? And the more processes your design should contain, shouldn’t it be so?

But what if you were told that facilitation is also about doing less, of practicing the art of taking away, and answering the question of: what is really essential? 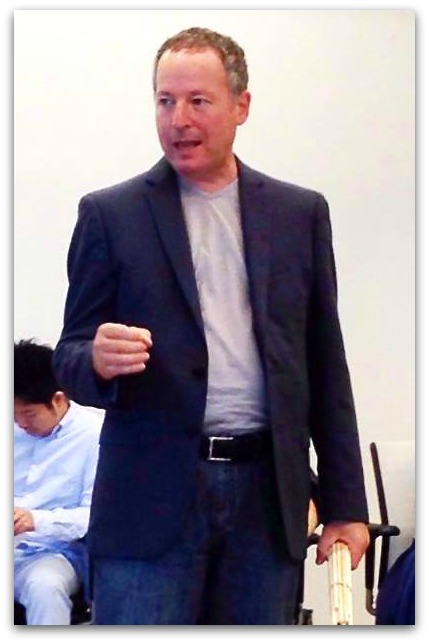 It will be 25 years in 2015 since I founded Blue Wing Consulting from my home base in Boulder, Colorado. Over the years, I have acquired a deep, deep bag of skills, methods and techniques. My next stage, however, is not in acquiring (I have enough) but in cultivating real learning in the power of presence. This means cultivating inner and outer calm and being alert and relaxed at the same time. This calls for having an open mind and an open heart. For example, as I use the common facilitator’s technique of asking a question, how different would this be if I am coming from a place of anxiety?

I remember early on in my career as a facilitator when I literally froze! I was at a team building event for a law enforcement organization. The different departments involved were hostile to one another and it showed. Their body language was closed, there was no eye contact, and there were reports of members using keys to scratch each other’s cars. And everyone had guns. I really didn’t know what to do and my colleague was freaking out too. Somehow, we were able to ask the commander to make compromises (especially with the gun situation) but this event did make me cringe.

Contrast this with another event, which at first impression would be cringe-worthy. What would you do if you were facilitating a group of marginalized formerly homeless people on a strategic planning and marketing process and one of their members gets disruptive and continually yells, “get on the bus!” Would you ask this person to leave and potentially trigger feelings of exclusion that these members have been continually exposed to? Would you insist on following the design that you had already carefully crafted and considered your best design before the disruption took place? What if this design is colliding with the reality of what is happening? I then asked myself this key question: what serves the group in this moment? I abandoned my original agenda and told the group, “I don’t think my plan works for you. Here’s an alternative.” I didn’t ask the “disruptive” person to leave. I found out she was schizophrenic and was off her medication. I suggested instead that the group get noisemakers and in rhythm yell out marketing strategies for their organization. The group created a performance piece which normalized the initial disruptive noise and resulted in a long list of ideas. The winning idea involved buying a used bus to bring the group’s products to different craft fairs around California. Everyone somehow “got on the bus” and made the “abnormal” behavior the source of brilliance in the room.

The previous example is a single event, but I’ve also facilitated meaningful multi-month deliberation processes, when groups of people come together to discuss complex and stakeholder numbers can be in the hundreds.  I have worked with farmers, farmworkers, and housing developers (groups with a history of polarization) to reach consensus on what housing for migrant seasonal farmworkers would look like. Within the first 15 minutes of being with the group, the level of animosity was palpable and I knew that my agenda wasn’t going to work. I had to go back to what the group needed at the moment. My first task then was for each member of the group to see each other as human beings. I used an Appreciative Inquiry Approach wherein I asked each one to share the answers to the questions, “What does it mean to have a home?’  and  “What does it mean to be in the work of producing food for people?’ I could feel the emotional shift in the group as they created a common ground through their responses and they began to see each other not as enemies.  The group did reach consensus with this year-long process and their proposal  of how funds would be used for farmers’ housing was approved by state legislature.

In my personal life, I’ve applied the same principle of staying in inquiry rather than advocating my own agenda. I strive to maintain curiosity and openness. And I am challenging myself as a facilitator to be “as little as I can be”  and  “do as little as I can.” In this way I allow people to do their work. The essence of facilitation is really asking “Can I pose the powerful questions?” and then stepping back and letting people grapple with it. If we are to be true partners in the system and catalysts for change, it is important to learn to co-design with your client; not to design in isolation; and to know how to frame the provocative question.