Making Your Job Easier as Facilitator – The Art of Preparation 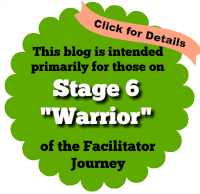 Today, we’re going to talk about how our team usually prepares for a facilitation event. It is a little bit like preparing a picnic! You want to get all of your dishes figured out ahead of time, know which dishes go together and decide how you are going to arrange them in the agenda.

We’re going to talk about the creation of print visuals as a major preparation step when you’re working alone as a facilitator. I’d like to get one thing “off my chest”. Yes PPT (PowerPoint) slides might be easier but they don’t always work for the space you have or the group culture. Think of the group that always uses PowerPoint slides in their meetings. It might be a highly technical group. Take them out of their comfort zone a little bit. Have them look each other in the eye and not have discussions in a slightly darkened room! The presence of the PowerPoint projector and screen sometimes signifies to the group on entering a room that it will be a presentation style event. That is exactly what you do NOT want to convey in a facilitated event.

Also imagine a scenario where there is literally no room to put a slide projector and no wall on which to project the visuals. This is where the printing out visuals that take up a smaller space than a projector screen.

I would say 95% of the time, I do not work with the PowerPoints. I DO use PowerPoint slides when the groups are larger than 40 because it means I don’t have to make several versions of the same visual. But, I admit sometimes even with 50 or 60 people in the room, I still create giant flip charts with my instructions or the focus question, one at each end of the room. It just keeps the whole event a little more humane.

Here are two photos of the visuals. The first is an opening activity visual I have used with groups. I shared this question with the group and then I briefly explained the activity. The posting of the question kept them focused on exactly what I was trying to have them answer.

The second photo shows a way I typically post aims for the day and the group’s mission statement. 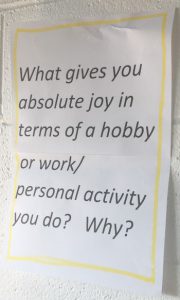 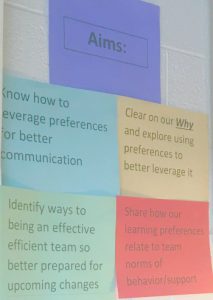 Ok, now watch this video to get a better idea of how to do this in a multitude of settings. Here’s a freebie small group handout on helping individuals in a team share their preferred communication and work style with each other.
Tweet
Posted in Dialogue, Effective Meetings, Facilitator Competencies, Group Participation, Facilitator tools, meeting dynamics,, Guiding Groups, Stage 6: Warrior